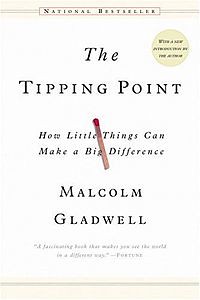 The million dollar question in PR is how to get your message to appeal to the masses. That’s part of why the Walker Sands Book Club selected Malcolm Gladwell’s The Tipping Point this quarter.  In this fascinating “biography of an idea”, Gladwell argues that messages spread the same way that viruses do, and that behavior is a contagious social epidemic that can be sparked by three agents of change: the Law of the Few, the Stickiness Factor and the Power of Context.

The Law of the Few

The Law of the Few is the idea that social epidemics are driven by the efforts of a small group of exceptional people. There are three types of idea drivers:

The success of any kind of social epidemic is heavily dependent on the involvement of people with these particular, and rare, set of social gifts.

The Stickiness Factor is the belief that any message can be tipped simply by tinkering with the presentation of ideas. Even the most trivial adjustment can have a critical impact on a sticky epidemic. Paying careful attention to the structure and format of material can dramatically enhance stickiness.

Gladwell states that direct marketers are the masters of stickiness, with some of the most intriguing conclusions about connecting with customers coming from their work. Overall, the lesson of stickiness is easy: package information in a simple way that can make it irresistible, under the right circumstances. The challenge is finding that set of circumstances.

The Power of Context

Epidemics are extremely sensitive to the conditions and circumstances in which they occur. Gladwell presents the Broken Window and Power of Context theories, which are both based on the idea that an epidemic can be reversed or tipped simply by tinkering with the smallest details of the immediate environment. These theories argue that solving crime begins with improving more minor aspects of the environment.

Gladwell also made the argument that our character is not a fixed personality, but rather a bundle of habits and tendencies. The elements that make up our character are only loosely bound together and entirely dependent on circumstances and context.

Lastly, Gladwell discusses the power of community. His research shows that small, close-knit groups have the power to bring about fundamental change in beliefs and behaviors, magnifying the epidemic potential of messages and ideas. The Rule of 150 shows that a group of 150 people or fewer make the greatest difference, as peer pressure is extremely powerful in smaller numbers where familiarity exists.

We are powerfully influenced by our surroundings, our immediate context and the personalities of those around us. So what do the lessons from The Tipping Point teach us about marketing?

What's your biggest marketing takeaway from The Tipping Point? Share it with us @WalkerSands.