Myths About the Media Interview 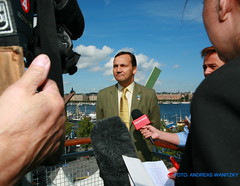 In our blog introduction post, we noted that we come across recurring pain points for our clients.

One of these difficulties surrounds the issue of a media interview. Whether having an on-air conversation with a radio personality or news anchor, being quoted for a daily newspaper, talking with a reporter for their news blog, or even taking part in a "Twitterview," an interview can play a significant role in public opinion about a company or a person.

So with so many different types of interviews, it's understandable to feel somewhat anxious before sitting down with a reporter. Many questions may arise: Is the reporter expecting that I'll have answers for all his questions? What information will the reporter know ahead of time, and how much explanation will be necessary? Will I be able to review the story before it's published? What if I say something that's incorrect or I want to retract a statement?

It's best to take it one step at a time and realize that the journalist is just doing their job. They are often overworked and simply seeking a good story that will intrigue both their editor and their readership.

Here are some points of clarification for common misperceptions about the media, as well as suggestions for conducting a better interview:

The journalist is not the only one who should prepare for an interview. As a result of overworked journalists, many just don't have the time to do extensive preparation and background research before an interview. It’s especially crucial for you to have established key messages prior to having a conversation with a reporter. If you know the gist of what the journalist will be asking ahead of time, jot down a few key points. This will prepare for a smooth interview by better utilizing both your time, and the journalist’s time.

We’re also seeing more and more journalists conducting interviews or sending follow-up questions by e-mail. As they can quote you directly from that e-mail, realize before you hit “send,” that what you’ve written might appear in print.

Reporters are not all created equal. Even if a reporter tends to cover business, it does not mean they are necessarily well-versed about all the issues. In fact, as today's hard-hit newsrooms are dealing with shrinking staffs, reporters must often take on additional responsibilities (and tackle topics) that they haven't previously covered. Be patient and realize you may need to give more details in certain interviews than you would in others. They’ll certainly welcome your expertise on a topic. Likewise, don't assume that because it's a national publication, that the interviewer will be more skilled at interviewing. We had one client interview with both a well-respected national publication about an issue, as well as a small trade publication. The reporter with the national publication was not knowledgeable about the subject, while the smaller (less known) trade assigned a very intelligent reporter. There was an obvious disparity between the subject knowledge each reporter possessed.

It will also vary by journalist or media outlet in terms of whether or not you can review your quotes before publication.

Simply answering a journalist’s questions is not always a good thing. While reporters certainly like to have quotes to add personality to the news, they also appreciate statistics, additional research and third-party sources that support your opinion or statement. It’s best, however, not to overwhelm them. Instead, give them the details without straying too much from the main message you want to communicate. Offer potential graphic/photo ideas, or even other expert sources who could provide additional expertise for their story. They’ll be grateful, since you’re making their job easier. Just don’t provide suggestions in a way that makes it seem like you’re trying to control the story. Be helpful, but not demanding.

Case in point: One of our clients recommended to a reporter that it might be nice to do a chart along with her story, offering to provide some data. The story ended up running with several charts, all attributed to our client. Photos, charts and their accompanying captions are the No. 1 most-read items that appear in print and online since it draws a reader’s eye to the article.

During your next conversation with a reporter, keep these points in mind and you’ll increase your chances of having a better media interview.